Rewind to about May/June of last year. I had goals of getting back on the track and running fast after a good fall. I had goals of running some competitive races through the summer and ending on a high point at the Sir Walter Miler. But my goals came crashing down as several races went sour as my legs seemingly hit a wall. After mulling over the cause of the tiredness I had been feeling I finally made the decision to invest in InsideTracker. Man, did it pay off.

I had dealt with anemia prior to transitioning to the gluten free diet, but I had not put 2 and 2 together until after I got my blood results back. I knew what low ferritin felt like but there is difference between the feeling you have when it is as low as 8 and when it’s at 33. After going through the previous races and workouts in my head, it clicked. That dead leg feeling complete with the heavy breathing and instant hatred of all things running, yep that was my ferritin talking to me.

For runners ferritin is a very important blood marker. Having enough Ferritin in your blood makes your stored iron accessible for use in oxygen transfer. If your ferritin is low you could have killer levels of stored iron but have no way of accessing it. Going to your primary care doctor and asking them to check your iron typically doesn’t cut it because often this test does not include your ferritin marker. Beyond that, primary care doctors don’t work only with runners. Technically a ferritin level in the 30’s is considered normal and for a non-runner this would probably not affect their daily life. In fact they probably wouldn’t even notice it. But for runners most people thrive at 50 or higher which brings up one of the biggest benefits of InsideTracker and one of the reasons I ultimately took the leap to do it. InsideTracker takes your blood sample and analyses it to determine the specific optimal ranges for your individual biomarkers. No one person is alike and this fact is true even with your biomarkers. What may be optimal for one person may not be for another. For each biomarker, the interface spits out a chart showing the normal range, your specific optimal range within that normal range, and the ranges that would be considered abnormal. To the right of the chart is an explanation of your value and food recommendations in order to improve that level or keep it the same. For us nutrition nerds there is also a tab for the science behind each biomarker and a video to learn more. Up until using InsideTracker I knew that my iron levels could have an effect on my energy levels but I wasn’t quite aware of the other vitamin deficiencies that could also have an effect on energy and performance such as B-complex, folate, and vitamin D (among others).

Luckily for me InsideTracker helped to me catch my low ferritin levels early enough for me to make some changes with supplementation and diet. I finished that fall with a 1 minute half marathon PR, a new mile PR, a USATF NC Long Distance Series Championship, and a 15th place finish at the .US 12k Championships where I ran my 6k PR twice to finish in 40:21.

Now fast forward to January of this year. I had all of the symptoms of overtraining and a training log to prove it. I took 3 days off in the middle of my marathon training cycle and turned to InsideTracker. Upon receiving my results there were certainly indicators of overtraining. InsideTracker opened my eyes to the idea of overtraining and broke it down from the standpoint of what is happening in the body because of it. As runners we push ourselves to our limits. We think, “If I am not hitting my splits, I am not working hard enough.” This may be true at times but other times it may be just the opposite, that you’re working too hard. In January I made excuses for my blood work and kept trucking but now that I have accepted what happened, I can rightfully say I did a lot of things wrong. But I have learned from it.


I tried to resume training following the marathon and it didn’t come. I made the ultimate decision at the end of April to hang it up and took an extended training break to ensure that I would come back refreshed. I resumed training at the end of May, starting with low easy mileage. I slowly increased my mileage while moderating the pace. As I started back into training I knew I needed to check in on my blood levels before getting to deep. I was feeling good but it never hurts to check. I retested everything and when I got my results back I could see the comparison of my previous number to my current numbers in chart format. I could see that I had improved across the board. I could see that my cortisol levels had gone down and my cortisol to testosterone ratio had gone up (something I had no clue about until I did
InsideTracker!). High cortisol levels and low cortisol to testosterone ratios can be indications of overtraining and or a suppressed immune system increasing the risk of illness or injury.

For those of you that follow me on my social media platforms you have probably been seeing my recent pushes for InsideTracker. For anyone gearing up for a fall season now is the optimal time to have your biomarkers tested to make sure you are starting your training on a high note. The worst thing would be to ramp up into training and after a few months feeling tired and junky realize you are dealing with a few vitamin deficiencies. Digging yourself out of such a hole while still trying to improve your fitness will not be a fun experience (trust me I have done it!). InsideTracker offers several options to suit any runner’s needs. Sign up before the end of July and you can use ANDIEJULY for a discount on the plan of your choosing! Enjoy 🙂

P.s. My Blog is moving to a new site!! I am finishing up the design and will be launching soon so stay tuned! 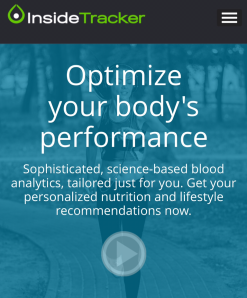